The GameShell's default interface is the Launcher. The Launcher is designed around a 320x240 display using the D-pad for input. 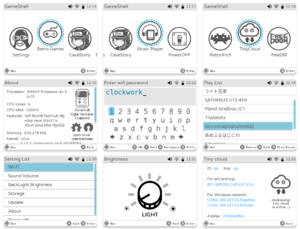 Launcher is written in Python, with a few related shell scripts. You can find it on GitHub: https://github.com/clockworkpi/launcher

A rewrite of Launcher using Go is also hosted on GitHub. You can switch between the two in the Launcher's Settings.